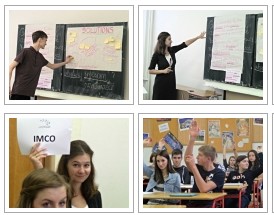 EYP days – A little bite of EYP. One just simply can´t get enough.

One of the EYP days this year was held on 6 November at Gymnázium Dašická in a beautiful city called Pardubice. Students from multiply classses were divided into three committees and their task was to solve problems connected with their topics.

The participants had only a few hours to create a resolution, instead of few days on a eyp session. They got to know each other at the beginning by playing name games and had a lot of fun during teambuilding. Some games were tricky,  other games were funny or silly, but the coorperation in the committee was important. In every way, after that everybody was excited to start working!

The delegates returned to their committee rooms to discuss the issues concerning their topics after a short break. The task was to come with as many solutions as possible and include them into the resolution. The variety of options was huge, but in the end it was important to compromise.

Before the General Assembly, the delegates had time to prepare their arguments and their speeches to present to the others what they have been working on the past few hours.

Who is in favour?

Everyone was looking forward for the GA, the excitement was in the air. For many delegates it was something new to speak in public among their classmates. But the speeches were well prepared.  After having a passionate disscusion and answering all the questions it was time to convince the others to vote for their resolution. And although not all the resolutions have passed, there was a great round of applause for everyone.

It sure was an extraordinary day for everyone. And I hope that I will see many new faces in Kroměřiž where the XI. Czech Forum will take place!